This is a returning customer of Sarsen Energy, who having had two appliances previously installed by us, decided to carry out further works to their property.

This entailed opening up a previously bricked up fireplace with the intention of creating as large an opening as possible, with a wood store to one side.

As the work commenced, we always knew that there would be a substantial amount of building work to be undertaken to achieve the end look that the client and us envisaged.

To say that there was an enormous amount of nesting material in the chimney would be an understatement.

Fortunately the client was able to see pass the mess of dust and rubble that we had created.

Having excavated most of the chimney, it was now time to start building and creating a new fireplace.

The construction consisted of concrete blocks, concrete lintels and faced with reclaimed bricks to be within keeping of the character of the property.

We also created a cupboard that is accessed from the room behind the fireplace.

As we always liaise with the client during all of our installations, it was decided that an oak beam was to be installed at the top of the aperture, a cupboard would be incorporated to one side and wood store with brick arch to be integrated within the brickwork.

Having created the new spacious fireplace, complete with a wood store to one side and cupboard to the other, it was now time to line the chimney.

We lined the chimney with a Class-1 904 Grade stainless steel flexible liner.

The installation was completed with a Stovax Riva Plus Large 11Kw wood burning stove.

A traditional stove that complimented the new fireplace with the correct output for the room. 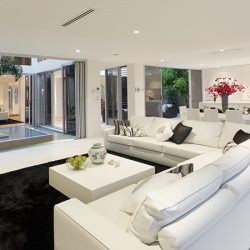 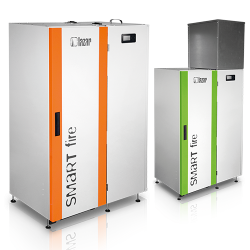 Why Consider a Biomass Heating System? 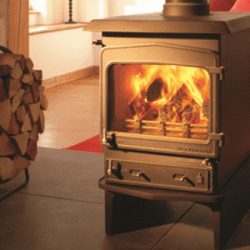 The Bliss of Double-Sided Stoves